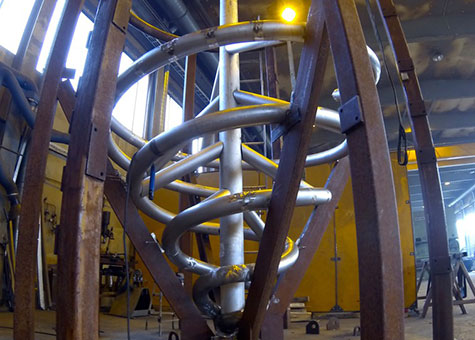 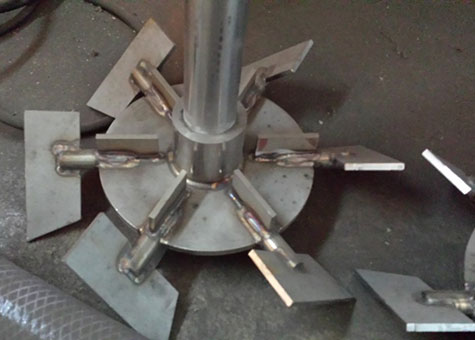 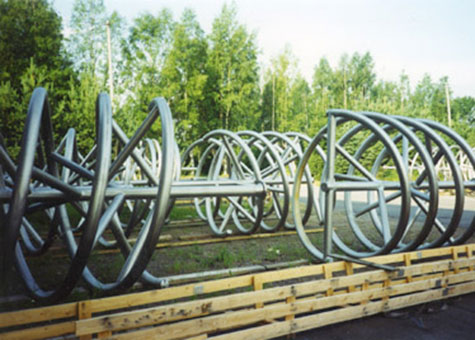 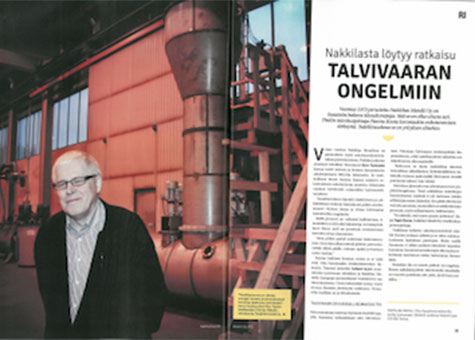 The MInt F-L reactor is an example of a stepwise, during several decades minted technology. The Driving force for this technological development has been the hydrometallurgical need for even larger reactors capable to an economical treatment of vast amounts of metal containing slurries, for example such dumped at both old and new mine sites.

A typical MInt F-L reactor is implemented as a cascade consisting of three to five separate flow loops, each divided into separate vertical and horizontal parts. Marine type high flow propellers are used to generate a master flow loop throughout each cascade, which are joined together by short overflow channels. The propellers arrangement allows a massive down flow in the vertical section, which in turn allows a design, according to which a diameter 2..6m flow enters the horizontal section at a speed of 1,0..2,0 m/s.

As the process economics of a MInt F-L plant, the very size of a reactor cascade greatly decreases the volume wise investment costs as well as the operating costs. The reactor cascade volume, typically 5000…15000m3, can be designed to exceed 20000m3. The main explanation for good process economics is an advanced use of high performance marine type propellers, a development, which has required several technical pilot installations based on serious flow laboratory test efforts.

The main target of the HPNP process is a complete removal of heavy metals from dilute aqueous waste streams was the main target. Most waste has its origin in pickling, where the steel strip draws out liquid films from the pickling baths themselves. This is true both for electrolytic pickling and mixed acid pickling, which is require washing of the steel strip to remove any pickling solutions adhering to the steel surface. One proportion of this water is also formed, when some of the electrolytic bath electrolyte is replaced by fresh sodium sulphate solution. This action prevents a too heavy build-up of metal hydroxide sludge and of hexavalent chromium. All solutions from the electrolytic pickling are pre-treated in a separate sulphur dioxide aided reduction process for a total reduction of their content of hexavalent chromium. A separate description of the sulphur dioxide aided reduction part of the HPNP process will be given as contextual to this main neutralization presentation.

Clean aqueous effluents are obtained. The improved performance and reliability of the HPNP process result in reduced emissions of the heavy metals to discharged water streams. The neutralization sludge, to which the metals report as hydroxides, is conditioned to inhibit any later oxidation of chromium to a toxic hexavalent state.

Neutralization is included as a separate process step in most hydrometallurgical processes in addition to wastewater treatment processes including neutralization of dilute stainless steel pickling solutions and mine waters. The HPNP process is applicable in all cases both in new and existing plants.